Further to our previous post on the Giant Poppy in Auckland Domain for ANZAC Day, here is an amazing timelapse video of the poppy being assembled and filled in over time with thousands of messages of support and remembrance from New Zealanders.

Remember that the Poppy is available to view until tomorrow, so if you haven't done so, we highly recommend you get down and see it for yourself. Definitely a great project and one that Spratt Financial Group is proud to have supported. 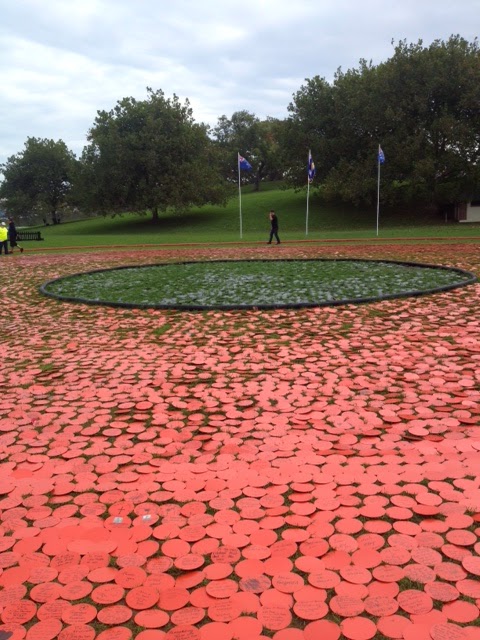 Posted by Scott Lovesy at 4:33 PM No comments:

This ANZAC Day, Spratt Financial Group is truly proud to be involved in supporting the creation of the world's largest poppy in Auckland Domain. The poppy is made up of thousands of red discs, inscribed with messages of remembrance and support from everyday New Zealanders from all walks of life. It is a moving experience to behold as I did when I took the photos below. It is especially incredible now as the poppy is completely filled in, ready for the breaking of dawn on ANZAC day.

We encourage everybody in the area to get down and see the poppy for yourself. It truly is an amazing project, and it will be the site of a spectacular dawn service on ANZAC day as well. Spratt Financial was delighted to get involved, providing insurance for the poppy itself and its creators free of charge. It is the least we can do to help bring this to life.

We wish all New Zealanders and Australians a wonderful ANZAC day and we hope you will all take time to remember the sacrifices of the ANZACs and all those who gave their lives defending our country and our way of life. And now, you can view a special timelapse video of the poppy coming together here. Be sure to check it out.

Posted by Scott Lovesy at 11:46 PM No comments:

The list itself for the first time does not include only New Zealanders claiming from travel overseas. A claim totalling $236,000 was made by a foreigner who suffered a stroke while travelling through New Zealand and was forced into hospitalisation with an extended treatment. The CEO of Southern Cross Travel Insurance remarked that in comparison to any of these claims, the small cost of insuring your travel paled into insignificance.


Highest value travel insurance claims for 2014:
1. $405,000 - surgery required for cancer in the USA.
2. $365,000 - air evacuation after a brain bleed and heart attack in North America.
3. $285,000 - blood clot while travelling caused a cardiac arrest on a plane, admitted to hospital in the US.
4. $236,000 - a tourist visiting New Zealand suffered a stroke requiring extensive hospitalisation and rehabilitation and transport to home country by air ambulance.
5. $193,000 - suffered a stroke in Europe, required air ambulance.
6. $177,000 - fell from a roof and fractured several leg bones in the USA.
7. $122,000 - family member of an international student diagnosed with cancer.
8. $120,000 - hit by a motorcycle in South East Asia.
9. $112,000 - heart attack while visiting New Zealand, required surgery and rehabilitation.
10. $105,000 - accidental fall resulting in broken bones in Europe
Source: Southern Cross Travel Insurance.
Whether you are travelling overseas, or you are a tourist looking to visit New Zealand, organising travel insurance should be the top of your priority list. Unless, of course, you have a spare $400,000 you're looking to offload.

Read how travel insurance bailed me out on my trip to the USA.
Read my experiences with the Southern Cross Travel claims process.
Need a free, no obligation quote? Use our contact form here.

Posted by Scott Lovesy at 2:01 PM No comments: