One of my personal friends recently went in to the specialist for a routine check of his heart.

The check determined that one of his arteries was clogged, and they moved him to immediate surgery to have a stent inserted. The surgery was non invasive, with a stent that eventually dissolves after widening and freeing the artery again. After a brief period of recovery, he was back on his feet.

My friend did have medical insurance cover which immediately covered his $5,000 bill for the surgery and that was of course very helpful, but his real boon came from the Trauma Cover he had invested in 5 years earlier.

Many forms of Trauma Insurance have partial payout provisions for a large variety of conditions, where if you are diagnosed with them, you are eligible to claim a certain percentage of your policies sum assured. In his case, he had $125,000 worth of Trauma Insurance. After enquiring and putting in a claim, the insurer paid him out 25% of his sum assured for the operation, as it met the conditions for the cardiac partial payout. So just by having trauma cover, not only were his medical expenses completely covered, he ended up with a financial windfall of $31,000!

It's not every day that you can go in for an expensive medical procedure and have it end up making you 30 grand richer, but with the right insurance, this is definitely possible, and it happens far more often than you would think! For those of you who have existing Trauma Cover, keep this in mind and closely read your policy wording to see which conditions will trigger a possible claim. We have encountered a number of people who could have been paid out partial or full trauma payments for things they did not even know they were covered for! For those of you who don't have trauma insurance, think seriously about it, it has certainly made my friend a very happy man!

If you have any questions about your existing cover or what insurance options are available to you just drop us a line anytime. 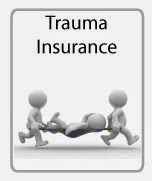