National’s election policy of increasing the superannuation eligibility age has reignited talk about NZ’s aging population and its various implications. There are several reasons behind the aging population including ‘baby boomers’ getting closer to retirement, falling birth rates, and improving healthcare leading to people living longer. The chart below, projecting the number of New Zealanders who aren’t of working age, illustrates the extent of the issue. Currently, just over 1.6 million people are either over 65 or younger than 15. This is expected to almost double over the next 50 years to just shy of 3 million people (almost half the total population). 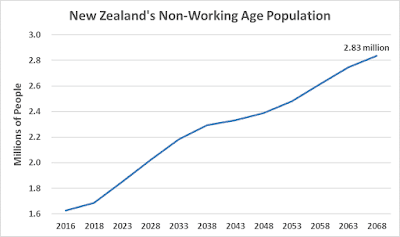 It’s not just us here in New Zealand who are going through this. Most developed nations are in the same boat - Japan being the worst, with 40% of their current population not of working age and their total population actually in decline! The implications of this are much wider than simply the Government’s ability to provide pensions to a growing number of people. It negatively impacts economic growth and overall productivity, with fewer people to turn the cogs.
So how do we solve this issue? There are a few options. One very complex solution involving changing people’s behaviour, is to increase the birth rate. Another is to speed up the adoption of robotics and automation to replace retirees. This will contribute to solving the issue, but requires a lot of investment and won’t necessarily be able to keep pace (50 years ago people were sure we’d have flying cars by now). But it does open opportunities for innovative companies and those catering to the needs of ageing consumers. Another option, and quite possibly the simplest of the lot… immigration.
We specialise in assisting clients near or in retirement to manage their nest egg to best suit their future needs. You can email us anytime for our latest SPRATT FINANCIAL Term Deposit rates (0.1% Platform fee).